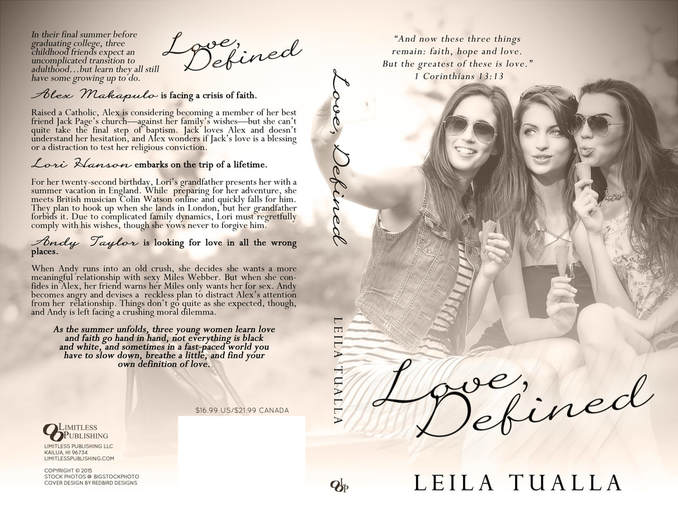 In their final summer before graduating college, three childhood friends expect an uncomplicated transition to adulthood…but learn they all still have some growing up to do.
Alex Makapulo is facing a crisis of faith.
Raised a Catholic, Alex is considering becoming a member of her best friend Jack Page’s church—against her family’s wishes—but she can’t quite take the final step of baptism. Jack loves Alex and doesn’t understand her hesitation, and Alex wonders if Jack’s love is a blessing or a distraction to test her religious conviction.
Lori Hanson embarks on the trip of a lifetime.
For her twenty-second birthday, Lori’s grandfather presents her with a summer vacation in England. While preparing for her adventure, she meets British musician Colin Watson online and quickly falls for him. They plan to hook up when she lands in London, but her grandfather forbids it. Due to complicated family dynamics, Lori must regretfully comply with his wishes, though she vows never to forgive him.
Andy Taylor is looking for love in all the wrong places.
When Andy runs into an old crush, she decides she wants a more meaningful relationship with sexy Miles Webber. But when she confides in Alex, her friend warns her Miles only wants her for sex. Andy becomes angry and devises a reckless plan to distract Alex’s attention from her relationship. Things don’t go quite as she expected, though, and Andy is left facing a crushing moral dilemma.
As the summer unfolds, three young women learn love and faith go hand in hand, not everything is black and white, and sometimes in a fast-paced world you have to slow down, breathe a little, and find your own definition of love.

What people are saying about Love, Defined

"As I made my way through the pages, I found myself becoming more and more emotionally invested in the characters. I rooted for Alex. Yet, like her roommates, I wished that she would relax and enjoy life a bit more. I hoped that Jack would be that special person for her. But, I understood her doubt. After all, if he wasn't "the one" and she made the wrong move, she could lose him forever. I wasn't sure if I wanted to shake Andy or hug her until she felt loved enough to respect herself and her body. Lori made me think of my younger self, holding grudges that were best washed away with forgiveness.
It's reasonable to say that Leila Tualla did an amazing job. How else could she have captured my heart and my attention so fully? I only hope that she writes a sequel. She has me wanting to follow the lives of her characters and find out what kind of women they become." - Shannon Love, author of Twisting my Kaleidoscope
"I loved how the moral issues were brought into this story, and seemed like very real issues that many young adults go through, their questions about their lives and also how Faith in God can play out in their lives, rather they believe or not. I think the friend’s in this story are so lucky to have each other and made this story really interesting to read. To me this isn’t the typical cliché type of book. These characters were all different and yet they have been friends for a long time and did encourage each other and tried to be there for each other.
I love reading books that make you think and feel you have gotten something out of the story, which I did. This will be a book that I will reread and there are some parts in this book that I want to remember. Especially that last quarter of the book. I also love that it is a clean, Christian book." - Diana's Book Reviews
"Love Defined , was one of those College friendship tales where it's not till something major happens in our life that we can come to appreciate the friendships we have established in life and about the people who care for us most when times get hard." Paula A. Philips.